I may have mentioned this several times but we are moving on Saturday from our apartment to a rental house in the suburbs surrounding Seattle. We went to the house last Sunday to pick up our keys, and while we were waiting for the landlord to come (we were early) we spent a combined 20 minutes clearing spider webs in the back yard.

I’m pretty sure the house has only been vacant for a week, but those spiders work fast, and there were A LOT of them.

Historically, I have been known to scream like a little girl and maybe even cry a little bit at the site of a little spider in my domain. Therefor, I think I’d better prepare myself mentally for the upcoming challenge of living with spiders, my sworn enemy. 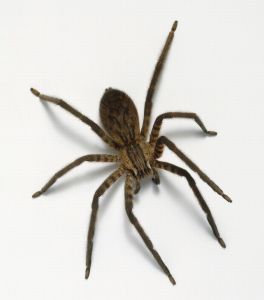 Reasons why I should be afraid of spiders:

3. I heard a rumor once that we eat approximately 8 (EIGHT!!!!!!!!) spiders a year while we sleep. This has consistently given me nightmares since that fateful day. It’s probable this was told to me by a brother who knew I was afraid of spiders. .

Reasons why I should NOT be afraid of spiders:

0. My fears are largely based on scary stories and lack of information. Surely the spider world can’t really be that bad. Example: It’s highly unlikely we eat any spiders in our lifetime (unless you live in South America – see below). Relief from my nightmare

1. Most spiders have eight eyes but that just makes it more difficult for them to see. Most spiders are actually nearly blind. This translates too me sneaking up on them… and BAM! (Actually, they can probably hear my screaming so I don’t think that will work.)

2. Spiders are essential to keeping your home & garden insect & pest free. WHAT? I thought spiders were an insect!? Multiple sources promise that  spiders are not bugs, although they are distantly related. Here is a nice comparison between the two classes. (Arachnida vs. Insecta).

3. Spiders are their own worst enemy, aside from footed (as opposed to “armed” humans). Also, did you know that some native people in South America eat tarantula? Yuck!

4. Realistically, only a small percentage of spiders is a danger to humans. Proof. Only 0.05% of spiders pose a small threat to humans, and even the spiders touted as “deadly” haven’t managed to kill anyone in a long time. (Innocent until proven guilty applies to them too).

Spiders crawling up your back

even spiders in your hair!

Now you’ve got the shivers!!

(Nursery Rhyme – I heard this from the Librarian at the central library in Seattle. You walk your fingers over the kiddo as appropriate and blow on their neck for “cool breeze”)

Thanks to God, Guts and Glory for nominating me for the Quote Challenge.

•Post 1 quote a day for 3 days (can be your own or from other sources).
•Nominate 3 bloggers to participate per post.
•Thank the person who nominated you.

My Quote for the Day:

See above – I’m treating the nursery rhyme as my quote.

People I Nominate for the Post A Day Challenge:

…. Umm… if you want to be nominated, let me know! I’d be more than happy to help you out.

“Lonely, I am so lonely, I have nobody… to nominate” (Sung to the tune of Akon’s “lonely”)