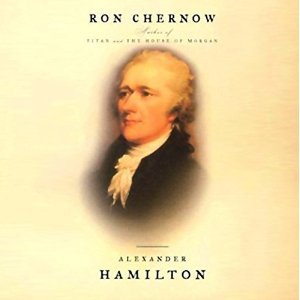 The life and accomplishments of Alexander Hamilton. The man who helped shape our beautiful country of America and is the one most responsible for the financial system, the coast guard, and many other important parts of our government.

The book is long. The audio book is long, and very monotone. There were parts of it that were interesting, but Chernow focuses a lot on people’s opinions of Hamilton and what he was doing. He reads a lot of excerpts of letters written from a variety of Hamilton’s admirers and enemies. I think that it is important to show how things are reacted to in their time, but it was done to excess in the telling.

Also this book isn’t only about Alexander Hamilton. It spends a lot of time sharing the life story of many other important men who either assisted or worked against Hamilton. George Washington, John Adams, Thomas Jefferson, and Aaron Burr are some of the people included in this telling.

Still, this book has a rating of 4.26 on Goodreads, so perhaps I’m just not cultured enough to appreciate it.